Rockstar games are renowned for their ability to move freely around the game world. LA Noire features the entire Los Angeles of the 40s, which you can ride and admire the nicely made streets and avenues. The game features several attractions of the city. You can visit them even if you don't really want to. The picture pleases with brightness and softness. And for lovers of antiquity in the settings there is an opportunity to make the game black and white - this way it becomes even more atmospheric.

The game also has a solid fleet of "secret" cars ... But it is of no use at all. The main character is a war veteran Cole Phelps. He serves in the police and in each mission he drives a police car (depending on the department, of which there are four in the game).

Thanks to the markers on the map, you can find secret cars (they are funny, the auto industry of that time gave out peculiar models), ride them, but after another staged scene, the secret car disappears from the other end of the city. And then again you will have to go on a police nag issued by the department.

In fact, there are no special differences in performance characteristics for different car models. Perhaps they are. But they are not felt. And the aesthetic pleasure of driving a three-wheeled concept car quickly becomes boring, given that you have to go for it, who knows where. 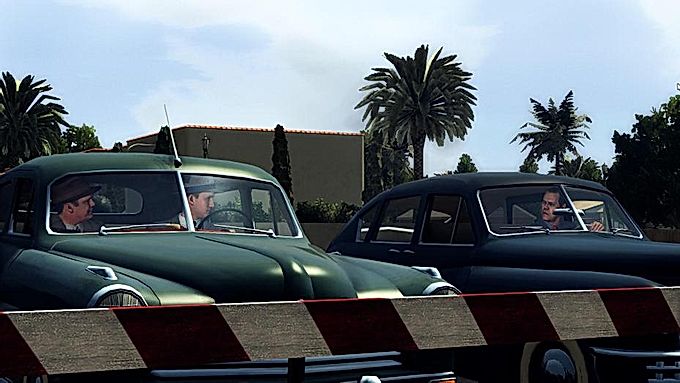 The investigation system is the main trump card of the game. Searching for evidence is exciting, especially since their search is accompanied by a special "investigation music" telling the player whether it is "cold" or "hot". If it does not work out, partners will come to the rescue, who will be able to suggest the right idea or suggest that not everything has been found.

And most importantly, interrogations and conversations. The game is voiced as a good TV series, professionally and tastefully. Each conversation is a separate adventure, so you need to follow not only the tone of voice, but also the facial expressions of the interrogated. Due to the nature of the graphics engine, it was difficult to implement accurate facial expressions of a lying person in 2011, and now it can be perceived awkwardly. But it still works!

It is very interesting to observe people, trying to understand what they are hiding. Especially when they lie. You, on reflection, show them evidence and catch it hot. The experience of success trumps any roughness in the process.

Over time, the route "collect evidence, interrogate, get to a new location, repeat" becomes somewhat monotonous. But, thanks to the plot, he does not have time to get bored.

By the way, about the plot. Where is the noir here?

At first glance, the plot is an ordinary detective story. With periodic flashbacks sending the player back to the time when Cole Phelpps fought the Japanese. And these flashbacks are generally incomprehensible at first. So are the newspapers. Yes, a plot parallel to ours is presented precisely through newspaper clippings scattered around the city.

The hero moves from department to department, investigates cases, chatting with partners - nothing special. Just a good-quality detective story about a good guy who went through the war as a hero and, having returned, continued to stand guard over law and order. He catches hijackers, fights a maniac, resists the drug mafia ...

... and only towards the end of the third chapter (of four), through flashbacks, conversations and actions of Cole, the creators of the game reveal the true background of things.

This is where the noir, taken out in the name of the game, begins. Present. Gloomy, cynical, cruel and hopeless. The creators delayed a little with the introduction of this atmosphere, and they could start to catch up with fear-anguish and earlier. However, the effect of plunging into the abyss of darkness and horror is wonderful.

A love story is also present. What is this noir without the previously mentioned fatal beauty? Alas, it is the worst exposed. She was treated negligently, and she is present only for show. And it would have been worth giving the girl an extra couple of minutes of screen time, how much better everything would have been!

A few words about the rest of the heroes. Companions, antagonists, escaped husbands, drug lords - they are charming and textured ... unlike the main character. Cole Phelpps is a boring, wooden character with almost no empathy. Perhaps it was assumed that the player himself would fill it with some content and meaning, but in the end it is too cardboard.

But this is corrected towards the end of the game. A brave policeman, having gone through a series of unpleasant events with the player and approaching the denouement of history, takes on character, face and opinion.

Fortunately, minor flaws are unable to spoil the pleasure of the sad drama unfolding on the monitor. In a sense, an anti-war drama (no spoilers, it's worth finding out for yourself).

This is a game with meaning, with a good idea, with everything that should be in noir.

This is an opportunity to plunge into the classics of noir and post-noir cinema with your head.

Before passing it, it is recommended to open an expensive whiskey (apple juice will also work), light a Cuban cigar (cookies, as an option) and plunge into the world of dark secrets and tragic stories of post-war Los Angeles. Preferably in a three-piece suit.

Can you keep playing LA Noire after the ending?

Answer: Instead of choosing “RESUME” on the main menu, scroll to “CASES” and choose any desk but “Patrol”. Select “The Streets of LA (Free Roam)” from the bottom of the list. Street crimes for the desk you chose will be replayable, and ones you have not yet completed will be marked red on your map.

Will there be a LA Noire 2?

Despite this success, there has yet to be a sequel made to this landmark game, which has left many fans puzzled. There have been a few ports of the game, including a recent shortened VR title called L.A. Noire : The VR Case Files, but nothing in the way of brand new content.