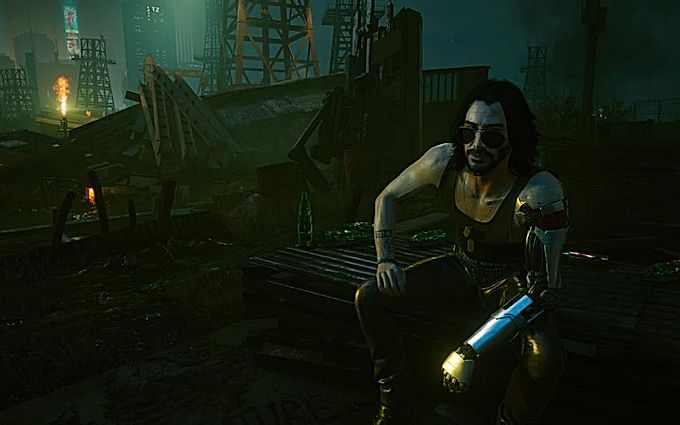 Cyberpunk 2077 is an open-world action game with RPG elements. This is stated by both the official website of the project and the game itself.

Silverhand and V are the best duo of recent years

A lot of things happen in the six-hour prologue, where we are introduced to the city of the future, but the most important thing happens at the end - a biochip with the personality of Johnny Silverhand is found in the head of the main character V. Rocker Johnny is invisible to others, but he, like a ghost, periodically appears in front of our eyes and comments on events in many scenes.

And if the first hours of life together the player perceives Silverhand as the very last bastard and terrorist, answers him rudely and asks him to get out of his head, then everything changes further. Johnny helps with advice, saves Vee and sees through and through those who are trying to warm up the hero. Listening to it is not only important but also beneficial. This creates a strong attraction between the heroes, and Silverhand from the "antagonist" position goes into the "best friend" stage. 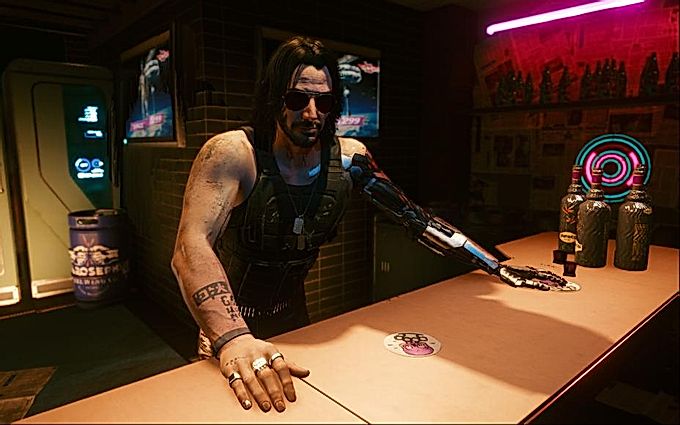 Thanks to the player's decisions and how he communicates with the construct in the head of the protagonist, the further development of events and even the number of available endings depends. We can find out why Johnny hates the Arasaka Corporation and wanted to destroy it - but only if we maintain friendly relations with Silverhand. Otherwise, this piece of history simply will not appear in the game, as well as two endings, one of which is secret.

The staging of dialogues and scenes turned out even better than in the previous project of the Polish studio - The Witcher 3: Wild Hunt. Here the player sees everything from V's eyes, and therefore plunges into what is happening more. Sometimes events on the screen take on such unexpected sides that the brain does not have time to realize everything and somehow react - you have to act instinctively and quickly, which makes you feel like a full participant in the events.

In addition to Johnny and V, a dozen more side characters participate in the plot, whose fates are just beginning to develop in the main story. Breyndance editor Judy, rogue nomad Panam, head of the "Afterlife" club Beast, ripper Victor and our best friend Misty's girlfriend - these are not all personalities with whom V will interact in the course of events. But it depends on his decisions in their tasks whether they will help him at the end of the game. 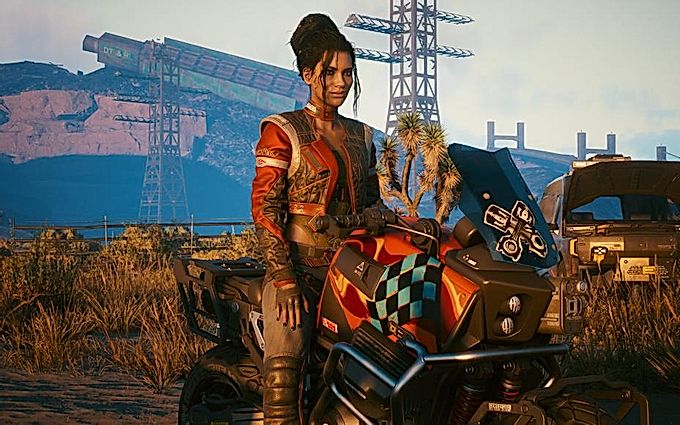 Romantic relationships are built more competently than in the same Mass Effect. At one point, you may even be kicked off and asked to remain friends - but this is only a transitional phase, because the characters are rushing between their feelings here and only the right approach can help in making connections. The sex scenes are quite inventive and different from simple physical interactions. They are more about feelings, about sensations and the merging of heroes into a single whole, than about a momentary act, after which they will only treat you differently.

Less interesting narratively will be the "orders" that V gets from local fixers, contractors with connections. But even they have their own goal - to reveal the world of Night City deeper, to expand the player's understanding of it. A netrunner who cannot be disconnected from the Network and will have to fight him off from the enemy gang; the cyber psychopath who killed her family and hid in the basement with their bodies; ritual of the Malstrom gang. From which a mad witch is born with mantis blades instead of normal hands - there are plenty of crazy, but interesting stories here.

And almost all of this is commented on by Johnny Silverhand, and therefore he is not felt only as a plot character. He is constantly next to the player, communicates with him and gives him advice, gloats or is surprised. There is a feeling that the main character here is not V, but the character of Keanu Reeves, and the protagonist is simply a means to tell the story of a revived rock legend. 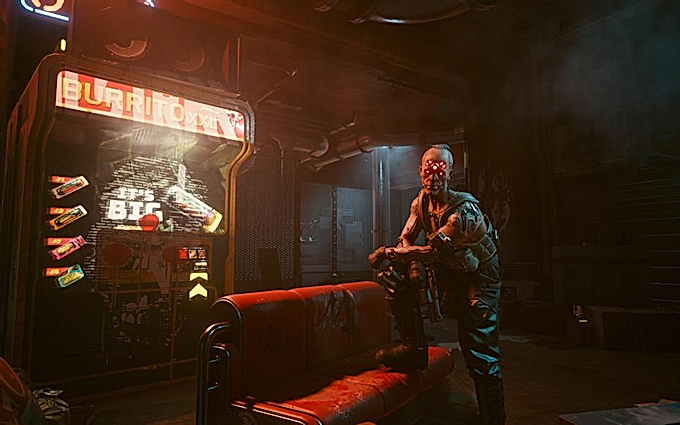 But the activities marked in blue are needed purely in order to test new scripts and weapons that the player received for the last order or found during the passage of the storyline. Nobody forces you to do them and you only need them to stay longer in Cyberpunk 2077.

Separately, I would like to highlight the Russian dubbing and selection of voices. That V, that Johnny, like any other minor and important character for the plot, played just fine. The abundance of mate does not bother at all. We play as bandits, thieves, murderers and kidnappers, but how else can they communicate, especially in stressful situations? And if at the beginning of the game there is really a lot of it, then after the prologue you can meet it once or twice per dialogue. Just like in real life.

Non-running and other ways of entertainment

The gameplay did not disappoint either. CD Projekt Red provided the player with a huge number of options to play, as well as tons of weapons. According to the author, the most interesting way of passing is combat net-running (hacking). By pumping simultaneously the possibilities for hacking opponents, and shooting from rifles, pistols or close combat with a katana, you can create the perfect soldier.

Starting an attack from stealth mode, you can launch a script on the local network of enemies, which is transmitted between them within a certain radius and inflicts periodic damage. Then they will start rushing about and not understanding where they are being attacked from. Or hack local turrets to pour fire on opponents, and only then engage in open combat - take out a revolver or rifle and start shooting everyone. It is very funny.

I would like to highlight the shooting separately - no one, except for the Bungie studio, has made the behavior of weapons so realistic in the gaming industry. CD Projekt Red has managed to replicate the success of the creators of Halo and Destiny. The guns are carried away after each shot, and when you pick up the machine gun and squeeze the trigger, it feels like you have something so powerful in your hands that it will explode now. Every reload animation, firing and sound is all done to the highest standard. The limbs coming off the shots only strengthen these feelings. 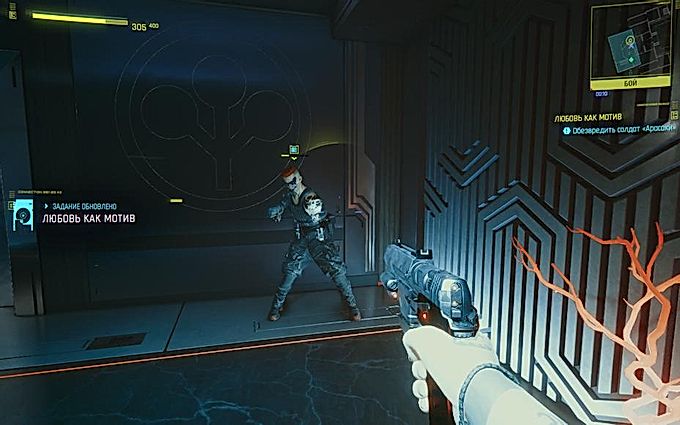 I would like to say the same about close combat. Compared to what was shown in early presentations and leaks, fights on katanas and mantis blades noticeably tightened up both in terms of animations and in terms of "recoil". Each blow to the enemy is felt, and a fight with swords is a separate test. Especially when fighting a boss who knows how to dodge, block and parry.

Skill leveling goes well with all this. Most of them give a passive effect, but in the case of bladed weapons, they force you to completely change your approach to battles. The same can be said about many active perks in the non-running pumping branch. They all come in handy in one way or another during the passage, especially if you do not run headlong through the plot, but approach the combat system inventively and constantly test new scripts and skills.

Alas, Cyberpunk 2077's launch isn't perfect, or even good. This is mainly the case for people playing on older PS4 and Xbox One consoles. On the PC, the game works tolerably well, as well as on the next generation consoles. 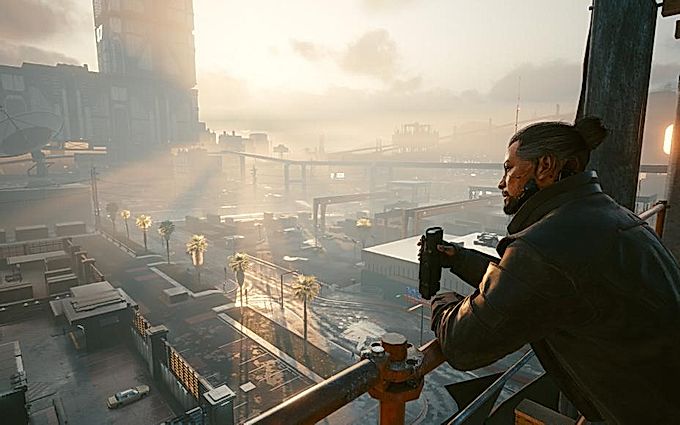 Even the bugs practically did not touch the author, and for all the passage it was possible to catch only two "critical" ones: in the first case, V during the break-in moved to a room from which there was no exit, and in the second the motorcycle got stuck in a pile of garbage. And when the hero tried to get up, he froze in the textures. More often there were minor interface bugs, which were treated by rebooting from the last save.

I want to praise the ride rather than scold me. The controls are made in such a way that the player constantly brakes before corners and enters them as expected in real life - at low speed. Unfortunately, the static traffic flow does not care about your observance of the rules, and while crossing the intersection, the player may simply be knocked down, and the driver who committed the crime will not even stop.

It is not entirely clear why it was necessary to fill V with a bunch of messages about the sale of vehicles. Having bought a motorcycle from "Akira" once, or having received a two-wheeled transport as a reward from a nomad of Panam, buying a car loses its meaning. They are big, you have to constantly huddle in traffic jams or drive "right through", touching and scratching the rest. Motorcycles, on the other hand, are small, zip at full speed between other vehicles and move around Night City and the surrounding area with their help is more convenient. 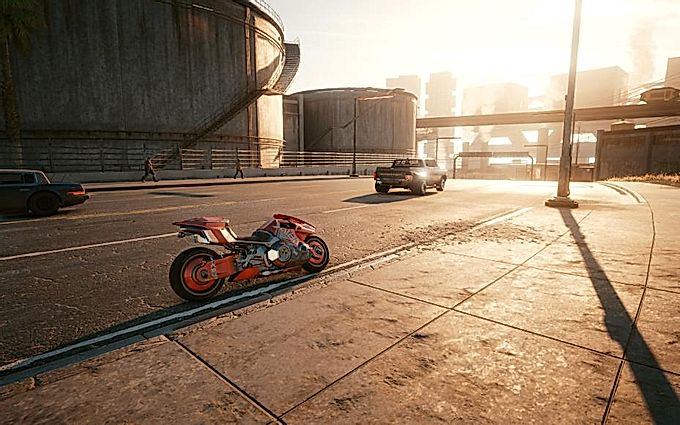 The equipment system also leaves a lot to be desired. Despite the excellent behavior of the barrels themselves, they constantly have to be changed due to the damage indicators. Of course, the "Creation" tab allows you to improve weapons to the level of the player, but this requires too many spare parts or pumping the "Technique" branch. In other cases, you will either have to do less damage from your favorite cannon, or change weapons and get used to new sensations.

Cyberpunk 2077 is a highly controversial game, and your attitude towards it will depend on what you expected to see in the end. If in your dreams it was an incredible role-playing game, with role-playing and a completely free world in which you can live, similar to the desktop Cyberpunk 2020 - the new project CD Projekt Red will disappoint and leave you heartbroken. You can, for example, read our "black review" of the game, from which dislike literally oozes.

If you didn’t expect anything but a “witcher with guns” or a Deus Ex follower, “Cyberpunk” will give you indescribable emotions. It's a great open-world action thriller, with interesting side-quests and storylines, and a solid storyline, the outcome of which depends not so much on your decisions as on your relationship with the playable characters.