A curse as a reward. Curse of the Dead Gods review 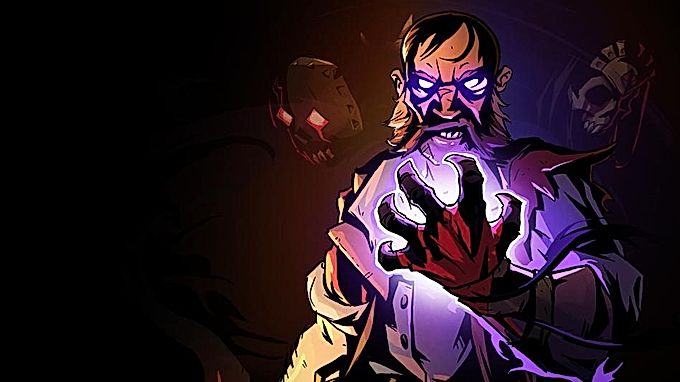 Independent developers have long since adopted this technique. Rogue Legacy, The Binding of Isaac, Dead Cells, Into the Breach, Spelunky and the like are very popular (if you haven't played any of them, you should try). Last year, Hades has become a benchmark for other roguelikes. The developers from Supergiant Games looked, thought, and realized that dying over and over again, returning and dying again without emotional stimuli is somehow sad. Therefore, they added motivation: the main character, with the help of the Olympic gods, tried to get out of the kingdom of Hades. Each time after death, the plot developed a little, it was possible to communicate with the inhabitants of the underworld and even with some bosses. Little by little, the hero himself developed, since from the campaigns he endured not only a feeling of emptiness.

Hades has won numerous awards for a reason, and for many it is one of the best games of the past year. The developers understood what the roguelikes were missing, filled in the gap and it turned out cool. But the guys from another studio - Passtech Games - decided to go the other way. Instead of creating the universe, plot, characters and hero, they focused on making every playthrough of Curse of the Dead Gods as painful as possible. And it's all about curses. 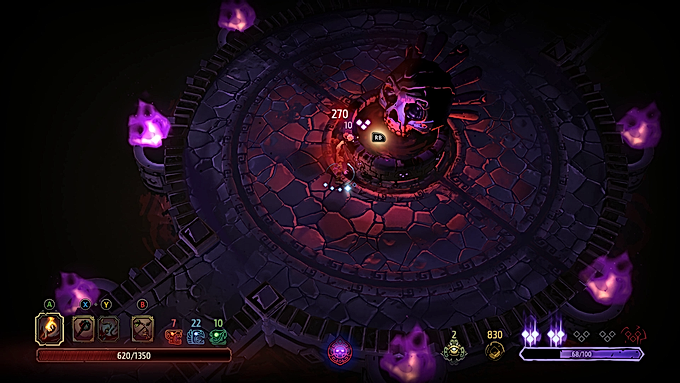 No, the hero does not curse the developers - the player copes with this perfectly. Curses are part of the game mechanics. The further you go into the dark pyramid, the more Corruption you receive. You go through the door, you want to heal - Damage grows. I saw the desired weapon or relic, but there is no money - donate blood, and Corruption grows. And with it you get a random Curse, among which there are both harmless and very cruel, up to the loss of the interface and ghosts chasing in the dark. Each chest turns into a trap, for the passage to the next room you lose money, gold on the ground quickly disappears ... And curses accumulate over time. The worst thing is the fifth. Basically, you turn into a helpless one-hit punching bag. Bale - and for rebirth.

Curses can be fought. Donate found items to the gods, some of which remove the Corruption level. Do not buy items with blood. Do not be treated. Kill bosses quickly - after everyone dies, one Curse is removed. You can live, but you have to give up too much. And this is the main feature of the game. You realize that you can become stronger, but it is not the concept of "risk-reward" (typical for "roguelike") that holds you back, but the "reward-curse". And the latter can alienate a huge number of potential players. 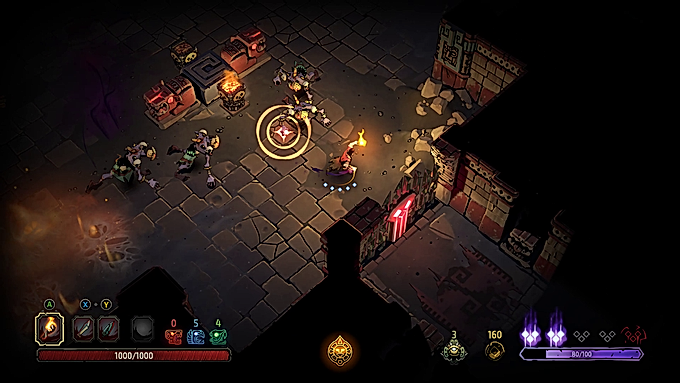 The game does not immediately show its evil face. At first, she lets you try out the first floor of each of the three Temples, kill one boss. You run them easily, the bosses are not difficult, the topic of curses is not particularly worried about, since the races are short. But then the second floor opens, the third, and then - a real game - the Pantheon, where conditions are tougher. Can you play this game to the end? Probably. But every time you almost-almost got there and are ready to enjoy your well-deserved victory, they politely slap you on the shoulder and turn you towards new, much more severe tests, devaluing your conquests.

Rewards for defeating bosses are skulls and rings. The latter are needed to open weapons, and they will appear in Temples. And you will have to knock out a lot of rings. But the skulls are necessary so that the "trembling creature", the main character, could declare himself from the very beginning of the passage. And it takes even more skulls, hundreds, to open all the altars, upgrade them to the end, and open all the Blessings. The more you invest, the more likely you will get cool weapons from the start.

It's a long game. Skulls and rings accumulate slowly, progress is not felt, because each time after a victory, new floors are opened, and it becomes more difficult to survive. And this is the main problem of the game - not curses at all. The problem is that it quickly begins to feel meaningless. Hades rewarded you for the races with history and bonuses, new weapons and artifacts, and gradual leveling. Dead Cells can be flown in 40-60 minutes, defeat the final boss, exhale, tick "done" and try again with a new build. Right there, like a hamster in a wheel, you rush through the dungeons, extract resources for upgrades, and the light at the end of the tunnel is not even visible. There are doubts that it exists at all. 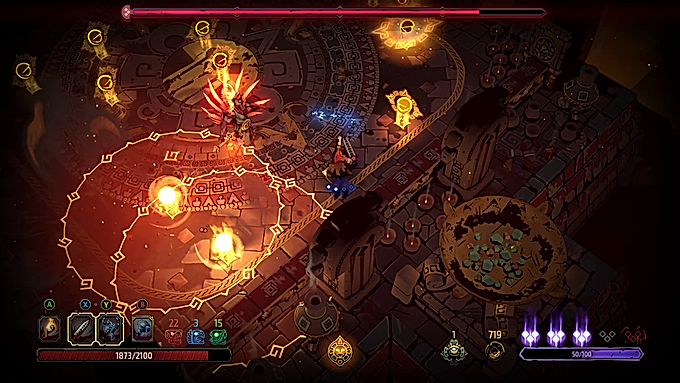 There is no plot. The hero has no character. There are no other characters. There is only a desire to get out of the pyramid, but hours pass, and you don't even come close to the final. The developers created a great roguelike, but removed the motivation, which is why many users are likely to abandon the path in the middle.

The game mechanics are well tuned, others are the envy of others. There is an interesting concept of light and dark giving their bonuses. The levels are full of traps, and in each temple they are different, like the sets of enemies. It is very interesting to create "assemblies" of the hero, since he is able to take with him three weapons and six relics. Synergy between different elements also attracts. For example, if you hit a poisoned enemy with a fiery whip, then he will receive additional damage. There are dodges and blocks, but the stamina reserve is small, so during the battle, you also need to carefully monitor this parameter.

There are many different types of enemies, over time, enhanced options appear. There are also a lot of bosses, and you need to build ideal tactics against each so that victory is given with less blood.

The game has a dark style reminiscent of Darkest Dungeon and good soundtrack. If we disassemble it into components, then it turns out almost an ideal "bagel", but only it does not bring joy. 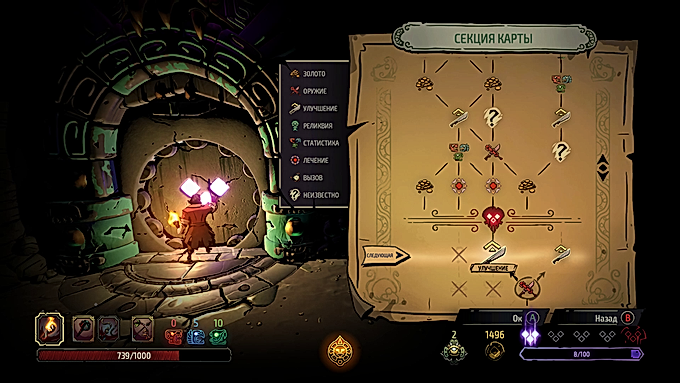 The creators of Curse of the Dead Gods did everything right. The curse system is like a hot spice. Not everyone will like it, but the game doesn't try to be kind. The mechanics are set up almost flawlessly. Battles are fascinating, and even exploring temples with clocks does not lose its appeal. But the game still gets boring over time.

The developers made the game too long for a roguelike. Each successfully completed cycle does not bring you closer to the goal, but moves you away from it. The challenges become even more difficult, and the goods in the store are annoying with high prices and the need to kill bosses over and over again to get a subtle and, most likely, useless bonus. The plot does not develop because it does not exist. The game quickly ceases to amaze, it becomes boring. And I want to go through Hades again.