Chronicles of lies and manipulations. Chronicle of Chaos Review 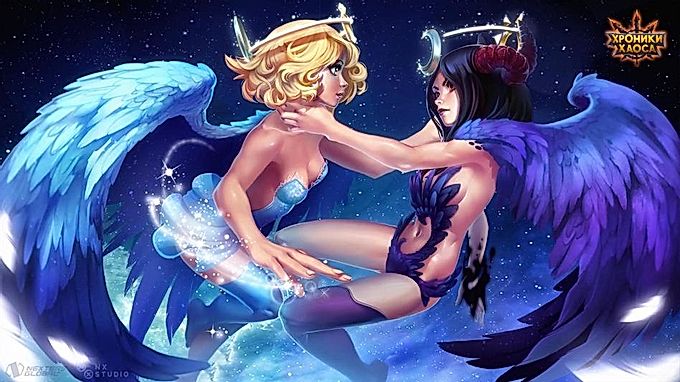 So what is Chronicle of Chaos? There are puzzles from advertising in the game. They are beautifully designed, very simple, it is very difficult to make a mistake when solving them. There are only a dozen of these puzzles in the game. In fact, Chronicles of Chaos is a casual simulator of an online role-playing game. More precisely, not a simulator, but an imitation, a defective copy.

In "Chronicles" there is no developed world, there is no history of it, no legends. Behind the colorful façade of the "game" is a dummy. These are the developers of old-school role-playing games, for some reason, worked out the game worlds, filled them with explicit and hidden meanings. Writing stories and guiding the player on adventures.

Formally, the campaign in "Chronicles of Chaos" is present, but the developers did not bother to fill it with at least some kind of content. The whole "campaign" is reduced to a linear passage of missions. In the first chapters, the "heroes" can still exchange a couple of phrases with each other, and then fall silent. 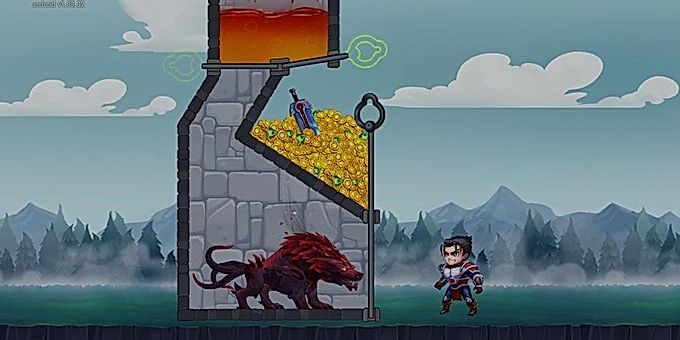 Several dozen heroes of various classes are available to the player. Some heroes are given out during the campaign, others can be summoned by accumulating resources. Users get the best heroes from chests.

Five heroes form a player's team, which will participate in the "battles". Assign a specific role to the hero, his position in the team is not given to the player. The developers have already thought of everything for him. The team is built in three lines: on the first line there are "tanks", on the second and third lines - support, archers, magicians. The only thing that the player can influence is the number of heroes on the lanes.

Having assembled a team, it can be sent to "battle". Before the "battle" you will be informed about the composition of the opposing group, the strength of your team and the enemy, about the chances of success. If you expect to somehow personally participate in the "battle" and, thanks to your personal skills and skill, to defeat a stronger opponent, then you will be greatly disappointed. 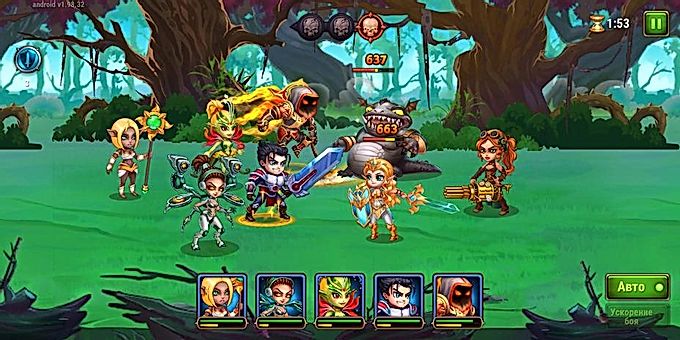 In fact, "combat" boils down to watching a mediocre animated movie in which your team takes turns crushing three waves of opponents. The player can manually give a command to use a super-hit by one of the heroes, but there is no particular point in this. It is much easier to press the "auto" button - in 99 battles out of 100, this will not affect the final result. Therefore, for VIPs (who are favored by the local Valkyries), an accelerated viewing of the battle is provided, and especially important persons can immediately go to obtaining trophies and experience one tap on the screen.

The choice of heroes and the combination of their skills are of much greater importance for the result of "battles". Here the player opens up small tactical opportunities. However, due to the impossibility of directly influencing battles, such a tactical element turns out to be useless against brute force. You can shuffle the "deck" of heroes as you like, but if they are opposed by more pumped characters (the strength of which the "game" will helpfully show you before the battle begins), then the victory will go to the enemy. At the same time, the "game" will remind you that you only need to pump up a little.

Leveling up in Chronicles is the most advanced element. The hero has experience, star rating, appearance, items, artifacts, parameters, symbols, the gift of the elements! And all this deep inner world of the hero can be pumped. Naturally, it is very difficult to keep track of so many parameters of the hero. But ... "Chronicles" come to the rescue here too! Using a complex "mathematical analysis" of all the parameters of the hero, the "game" gives the final result - power. The more "power", the cooler the hero. 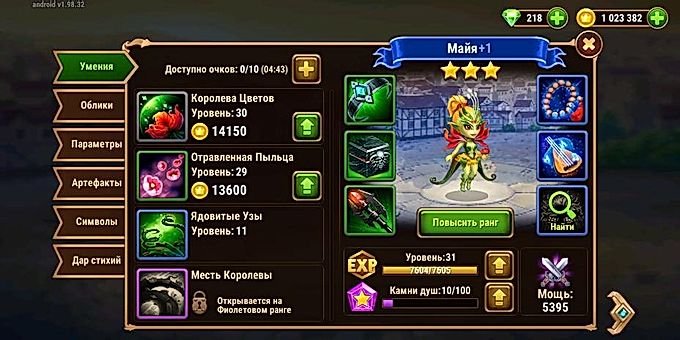 In addition to the characters, the player also upgrades his profile. As the leveling progresses, it becomes possible to open new game modes - expeditions, towers / dungeons, arena, large arena, etc. In these modes, the player can get additional items, but will not be able to level up. There are fascinating "campaign" missions for leveling up.

At a certain level of his profile, "guilds" become available to the player, where up to 30 like-minded people can be pumped together at an accelerated pace. And also special heroes become available to players - titans, which also need to be pumped, and which allow you to pump ordinary heroes.

The "game" showered the novice player with numerous prizes for "achievements" in the field of pumping. They are gifted with heroes, objects, and different types of game currency are regularly dripping into the account. Rock on! You're cool! Become even cooler and you will get even more! Stunned by such happiness, support and love, the player happily bathes in the rays of glory.

But this happiness will not last long. The energy of the heroes will run out, the seven hundredth viewing of the cartoon of the battle will tire, the team will want a cool heroine, whom he saw in one of the missions, but it does not work to summon her, and you also need to pump the titans, because the guild companions will not understand. And at this moment, the player, who has rapidly ascended to "success", will get the money to continue this incredible takeoff. And he will do it in vain.

"Chronicles of Chaos" is a reference donation trash heap. There are casinos (loot boxes), and pay-to-win (pay to win), and pay-to-play (pay to play), and advertising. Every month, players contribute their money to Chronicles of Chaos just to upgrade a little more, without thinking about what they get in return! 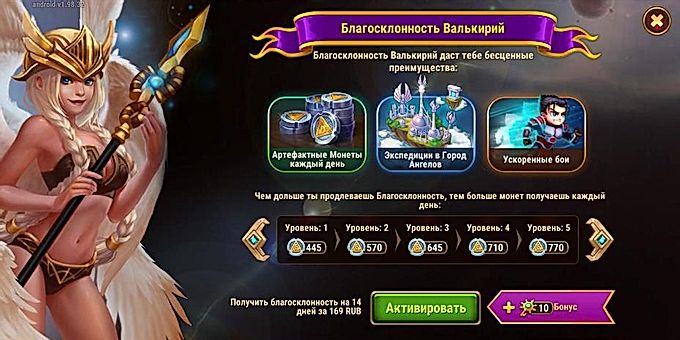 Is it really worth tossing money into a small smartphone game to see a beautifully designed and increasing number in the “power” column of your team? But the player in "Chronicles of Chaos" does not receive anything else in return. Is that the "game" will tell him that he is cool, was able to defeat the next "boss" and give him a little bit of game currency.

What else will the user get for this money? It has beautiful graphics, but mediocre animation. The game has sound and some kind of music. A dozen puzzles from advertising. Some players complain about technical problems, but the bulk of those who left negative reviews complain about fake ads. They are fair to complain.

This "game" was created only for pumping out money. As unnecessary, even the gameplay was cut out of it, leaving only pumping. For money.

The owners of the notorious Russian company Playrix, the Bukhman brothers, invested in the Cypriot studio Nexters in 2018, which, thanks to Chronicles of Chaos, grew 15 times over the year. According to the director of Nexters, one player can bring the company up to $ 1,500 in his “gaming life”. So Chronicles of Chaos is truly the path to success. But not the player, but the puppeteers manipulating him.