Everyone is running. Again! Crash Bandicoot: On the Run mobile runner review 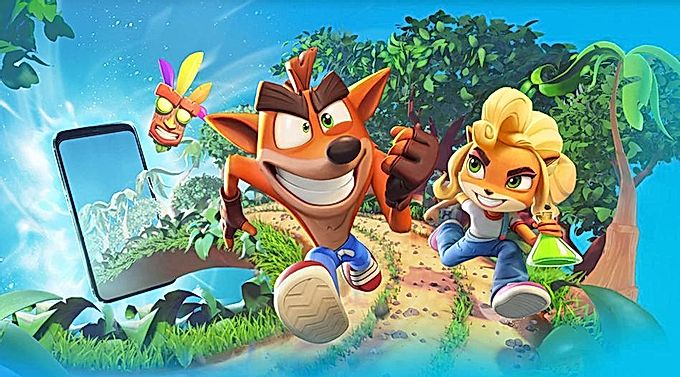 Runners are a well-established genre on smartphones. It has the undisputed leader with 3 billion installs - Subway Surfers. There are successful competitors, half of whom copy the hit in almost everything. But the former greatness is already behind. The peak of popularity was in the early and mid-10s.

After the announcement of Crash Bandicoot: On The Run and the appearance of the first screenshots, many had the impression that King was preparing another clone of Subway Surfers for the release. The King's studio franchise was, of course, popular, but doubts about its success remained.

However, the studio is not the first time to arrange a revolution in an era of stagnation. In 2012, their Candy Crash Saga exploded into the casual entertainment market. At some point, nothing was more popular. But this is a simple shareware puzzle "three-in-a-row" for browsers and phones!

So the impetuous bandicoots could both fail, getting lost among the numerous products, and soar to the top of the charts, defining a new look for runners for many years to come.

Crash and Coco Bandicoots race along the famous three-line treadmill. But now this is not an endless movement to nowhere. This activity made sense. Heroes gather resources, dashingly break boxes, jump, dodge traps, brush off small opponents and fight villains, led by Dr. Neo Cortex, and their minions. Fun!

The seemingly slow pace and, as a result, the simplicity of the gameplay are deceiving. As you progress, the difficulty increases. But the increase in complexity is not due to the increase in speed. At new levels, new obstacles appear, to which you need your own approach. The first encounter with them is never easy. Daily Challenges with good prizes will raise the difficulty even higher.

The levels on which our heroes rush are created by hand, have two or three tiers, are well-designed, beautiful, with their own little secrets. Self-repetitions are found, but there are no tracks collected from worn-out pieces. No software generation, no permanent copy-paste. There are also disadvantages to this approach. There are few levels, and on the screen all the same locations flash over and over again, and the one hundred to five hundredth passage is already on the machine.

Aku Aku accompanies us on missions. This is not a book by the famous traveler Thor Heyerdahl, but a good healer, once imprisoned in a voodoo mask. As with other parts of the franchise, he is capable of blocking one or two hits against the Bandicoots. The number of blocks depends on the number of collected masks.

Having lost the support of Aku Aku, Crash will survive a collision with a box or small enemy. Only temporarily will he receive a concussion and flying "stars" around his head. Repeated "accident" at this moment takes life. Serious obstacles for the Bandicoots are fatal right away. So it is worth avoiding collisions with boxes of nitro, blowing up on TNT or falling into the abyss. The level will have to be completed again.

It would seem, so what? The resources already collected will not be taken away, they will be thrown back to the last open control point. Delov something! The catch is that death resets the step counter. The tokens received for each step are exchanged for trophy cups. The more tokens you change, the more profitable the rate. For twenty thousand, the generous totem, installed on Wampa Island, will present the heroes with two hundred cups, while for five thousand it will award only twenty-five. It is not an easy task not to lose tokens during the races.

Trophies form the rating of communities. The higher it is, the steeper the prizes at the end of the season - already a traditional approach in free-to-play games. This is a manipulative practice. And it works. Huddled in flocks, users run, run, run ... Only death can stop them and deprive them of the coveted trophies. But you can negotiate with a bony one. She will forget about your sudden death for viewing ads or take money.

Having collected resources, we settle down on the base, which the clever and beautiful Coco Bandicoot has deployed on Wampa Island. We build and improve laboratories, perches and much more. Owners of virtual "farms" will be familiar with this. Only this farm does not produce food at all. Chickens hatch nitro, frosty, ash eggs, which arrive at Coco's lab. There they, along with other resources, are processed into serums, bombs, blasters and bazookas.

This is how Crash Bandicoot: On the Run compares favorably with its competitors. Development of your own base, creation and modernization of production allows you to diversify the gameplay. The flip side of such a hike is the need to periodically return during the day to occupy the vacated production chains.

Not all areas of the island are available for construction yet. Tapping on some points of interest leads to a message about the upcoming release of this content. Obviously, the developers have some kind of plan (and they stick to it).

Having produced weapons, we go to battle with bosses. But the arms production takes a lot of time. So you have to wait. Or donate. Rubles-Euros-Dollars save a lot of time. It's good that the opportunity to play is not taken away. There would be a desire. No one will limit you in exchanging your personal time for the next twenty thousand steps or ten thousand wampa fruits. Valuable resources, however, will not be endlessly given out. Boxes with them are not updated frequently.

On Wampa Island, money has value. Crystals are not distributed right and left. Accelerated advancement in combat races will not cost a virtual penny at all. However, wealthy comrades will only reduce the time for grinding, gaining access to new areas and campaign missions before others.

At the time of this writing, the pay-to-play monetization system is not in use and there are no loot boxes! Amazing. Pay-to-win is very lightweight. It will be easier for owners of a small number of crystals to negotiate with death, so as not to lose the earned step tokens.

For premium currency, you can buy new skins for characters, additional tickets for trials, there is a paid battle pass - "Bandicoot Pass". Several subscription options for seven, fourteen or thirty days are also actively offered. This option is suitable for those who are ready to invest reasonable funds - you will receive a small amount of crystals at the beginning of the period, and another handful will be poured into the daily. Prices do not bite, but they cannot be called low either.

In general, monetization is adequate. At the time of writing the review. In Crash Bandicoot, you can spend time with pleasure even without donation.

The game is beautiful. Thanks to the high-quality work of artists, 3D-modelers, animators, designers, the project looks bright and adequate to the hardware capabilities of modern inexpensive smartphones.

The music is monotonous, and in general the sound design is average. Perhaps this aspect was given less attention during development than it should have.

Crash Bandicoot: On the Run is in good technical condition. Minor bugs jumped two or three times, but a few days after the release, Kings studio released an update with fixes.

If Kings do not break the current monetization, if they do not make mistakes in development, then mobile Crash Badicoot will have every chance of success. The first data on the number of downloads and reviews confirm this.

Crash was late for the peak of popularity of runners in the early 10s. But perhaps he will return them to their former popularity. This is a good game that fans of the genre and many fans of the franchise will love.