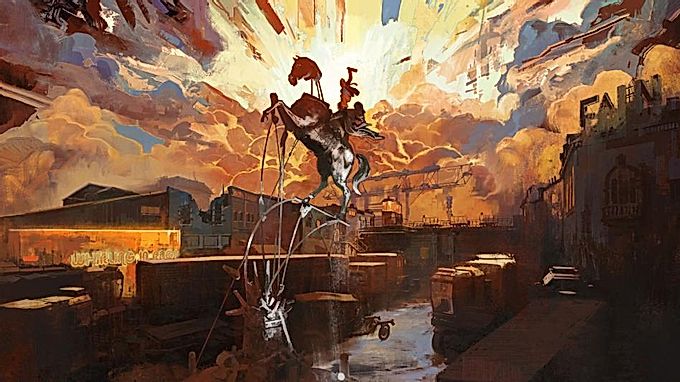 At first glance, we have a classic role-playing game with an isometric view, portraits of the main characters, skills, dialogues with many choices and endless canvases of text. It could be released by modern Obsidian and Larian, or old BioWare and Black Isle. But this is not the case. Estonians from ZA / UM are moving away from the usual game models with battles and complex skill trees. Our weapon is the ability to read carefully and carry on a conversation.

Disco Elysium is a completely interactive product, where conversations and monologues are the engine, and research is a mechanical action with the help of which clues, notes and objects are collected. All interactive objects are highlighted with a button and it is always clear where to go.

The protagonist sheet consists of 24 skills. The four main dimensions consist of six sub-points and, most importantly, have a real impact on the story. If you want to amaze others and yourself with encyclopedic knowledge - download the attributes of intelligence; to influence others - psyche; to be strong - physiology; dexterous - motor skills. Each skill is a separate voice in the head of the hero and the charm of the story, its depth and atmosphere depend on the seriousness in the approach to creating an alter ego. 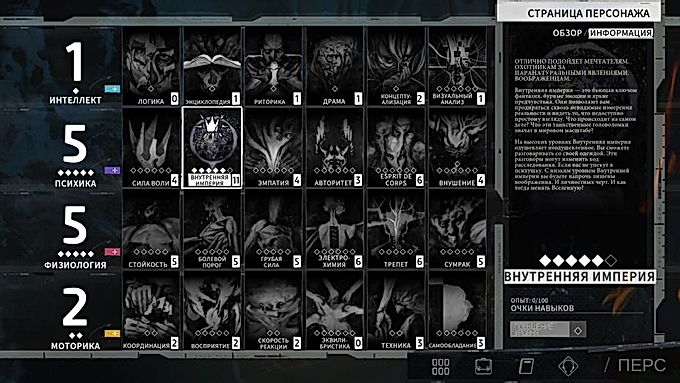 The harsh reality inherits the traits of the noir genre with a decadent society, fragile and cruel characters, corrupt and fallen personalities. The story revolves around a detective hero struggling with a specific medical disorder. After a depressing introduction, he enters the world as a stinking piece of meat - in his underwear and amnesia caused by unrestrained drunkenness.

The last straw for the body suffering from headaches and addictions will be a crime, which will be solved with a partner in Martinez, a secluded area of ​​Revachol. In the past, Revachol was one of the largest cities in the dystopian world, an industrial pole, a tourist attraction and the nerve center of international trade. After the revolution, it became a garbage dump with rickety buildings, protesting workers and residents. All entertainment is drugs, promiscuous sex and violence.

The investigation can turn out not only to interview witnesses and search for evidence, but also to a mental crisis, a parade of bribes, excessive use of alcohol and drugs, collection of empty bottles or even a bloody conflict.

The most striking thing about Disco Elysium is freedom without a convoluted script. The game is ready for the player's actions, who will be responsible for the decisions made. You can't get lost: just explore and communicate. The personality of the detective, with its merits and demerits, radically changes the way we see the world around us, creating situations that are as unlikely as they are cool. 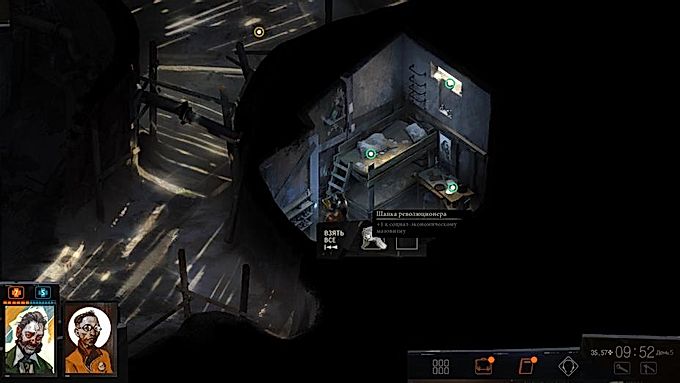 Information is obtained in different ways: by brute force, by the power of rhetoric or by subconscious hints. But not everything in the game is black and white. There are countless nuances to building an extraordinary story. For example, a detective may be a true genius, able to see clues where others do not notice, but lacks social skills. What are the consequences? Your interventions will be so offensive to those around you that there is no chance of getting the desired reward. But the great thing is that the character will not notice it. In his head, he acts as he should.

Gradually, the attributes will grow and allow you to enjoy incredible internal debate. Numerous personality traits offer both solutions to the issue and collapse leading to the failure of the main mission. Anything can happen in Disco Elysium, because success or misfire is guaranteed not only by parameters, but also by chance. In a win-win situation, anything can ruin an unsuccessful die roll.

One of the unusual elements that violate established traditions is the closet of thoughts. At certain moments, the psyche allows itself to ask itself questions based on glimpses of memory. Taking the time to think about it, the game rewards with valuable information and improvement in basic skills. 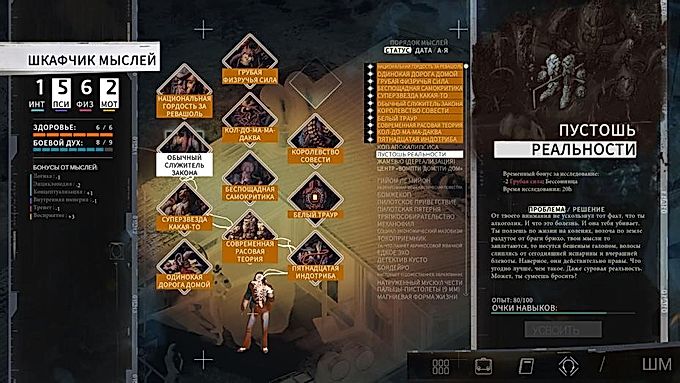 The long texts in Disco Elysium simultaneously create an incredibly simple yet complex structure of responses and thoughts. Before us is the history of the world, the tragedies of characters, dreams, sex, politics, horror and humor, with the help of which it is possible to firmly hold the player's attention. Despite the diversity, the developers promote clear topics and allow them to be watched from different points of view.

The approximately thirty-hour adventure can be extended with exploration and side missions, and the effect of the parameters on the narrative increases replayability. There are many options for building your own story.

There are no heroes and villains with the intention of destroying the world, but just a detective who is trying to solve a crime and not lose his mind. Completing assignments will improve skills, create new branches of dialogues and ways to overcome problems. This is the greatness of the project and its ability to surprise with a story that grows and develops with us. The same thing happens with the surrounding characters - they change. 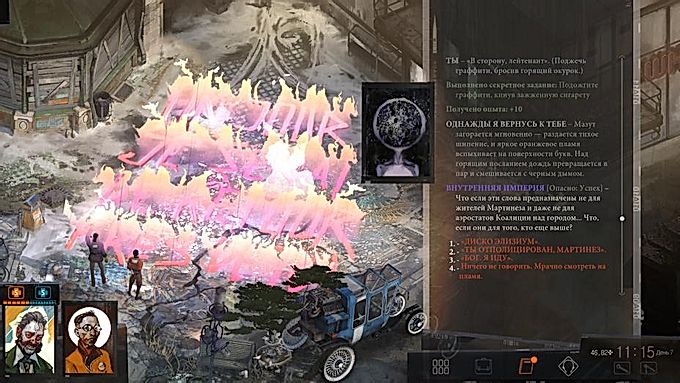 Visually, it is a watercolor canvas revived with careless brush strokes. The character illustrations, environment design, and user interface are pure art. The melancholic mood is enhanced by a beautiful soundtrack, the melodies of which are suspiciously fast.

At the same time, forcing yourself to take the game too seriously will not work due to the many deviations and quirks that are expressed in a cynical and humorous mood. Serious things are discussed on the screen, and you cannot accept them at face value, because the colorful tie of the protagonist suddenly intervenes in the conversation.

Confused only by the loading screen when switching between microscopic locations. For example, to go from the foyer to the roof of a building, you will have to contemplate it four times. 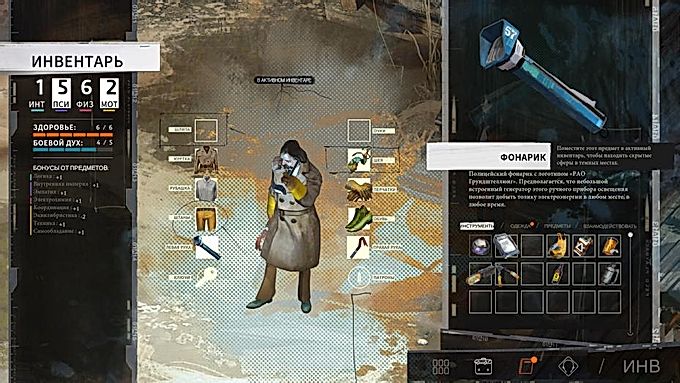 Courageous Estonians have overcome budgetary constraints and the industry's fear of original projects, so they have created a wonderful adventure with a vivid universe and a lot of memorable details. This is a great answer to board RPGs and the classic Planescape: Torment, but ZA / UM took it a step further and ditched battles to give the player a thrilling detective story.

The hero's actions not only determine the course of the narrative, but also influence the personality, and internal dialogues raise role-playing products to an unattainable peak. Walls of text in a game have never been more fun. Disco Elysium enjoys expertly written dialogues and internal monologues, a deep understanding of psychology, strengths and weaknesses of a person's character, and relishes small nuances.

But the advantages of the game are also its disadvantages. It will alienate many with the need to read a lot. There is no huge open world, a superman hero, battles and spinal activities. Others will fall in love with Disco Elysium forever and will use it as an example for other RPG developers.