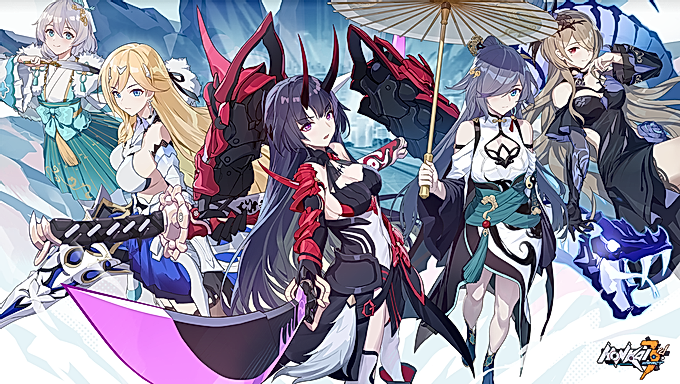 Realizing the increased interest, miHoYo intensified their media activity - cosplay from a famous figure skater, a collaboration with the popular anime Evangelion. Honkai Impact 3rd's popularity and installs are growing. But there is a chasm between her and Genshin Impact, because these games are from different worlds.

The difference between Genshin Impact and Honkai Impact 3rd is obvious in everything. The first is a full-fledged plot that involves adventures in the open world. In the second - a story that, without much success, tries to connect the disparate fragments of the game world. If the chapters of the storyline campaign of Honkai Impact 3rd are at least connected with each other, then the rest of the game activities are sewn into the game with white thread. The absence of the Russian language does not help either, since the general plot outline has a slight touch of idiocy.

A beginner player will have a hard time if he has never dealt with similar games before. Some events, resources, weapons, characters, stigmas, modes, etc., etc. are immediately piled on the gamer in one heap.The virtual assistant explains as best he can what is happening on the screen, but without basic knowledge of the typical structure of such mobile It will take a long time for a neophyte to figure out games.

Having made his way through the intricate interface, where every second item will ask for attention, the player will enter the arena of battles. This is the main game mode of Honkai Impact 3rd. The hardware capabilities of the average smartphone in 2016 were not outstanding, so you will have to fight either in tiny arenas or in a labyrinth of tiny "gut". However, the developers have competently approached the graphic design of the game and it does not strike the eye. 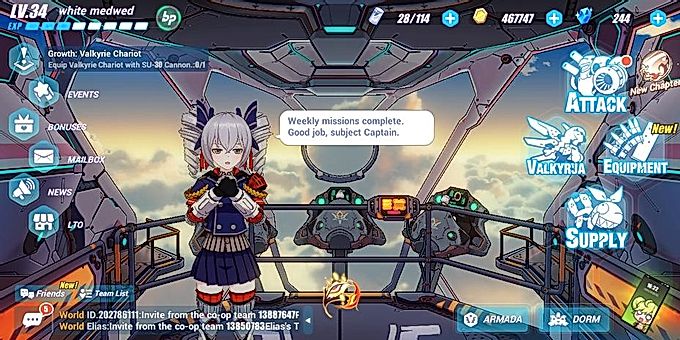 The main efforts of the graphics chip are thrown at drawing Valkyries, a little less at its opponents, surrounded by beautiful "cubes" that create the illusion of a large space. Slightly twitchy animation in battle is successfully masked by special effects and damage numbers flying out of enemies. Therefore Honkai Impact 3rd looks good and works fine even on modern low-cost smartphones.

Combat is the best thing about Honkai Impact. The player needs to learn how to use combos and active abilities, to carry out dodges and super-strikes in time. You also need to know the features of the weapons used in order to correctly position yourself in the arenas. But that's not all. There are three types of combat suits of Valkyas and their opponents - mechanical, biological and psychic. They relate to each other like a rock-paper-scissors. The quantum type stands apart. It has no obvious minuses and pluses in relation to other types.

Each Valkyrie has its own rank (B-A-S-SS-SSS), level, owns a certain type of weapon and, in combination with a combat suit, special techniques. In addition, three different types of stigmas can be placed on each Valkyrie. It makes no sense in the review to go into the details of local mythology. Suffice it to say that stigma is analogous to artifacts in other games. Weapons and stigmas also have their own ranks and levels that need to be increased to obtain higher Valkyrie stats. It is desirable to combine stigmas correctly in order to get an additional advantage. 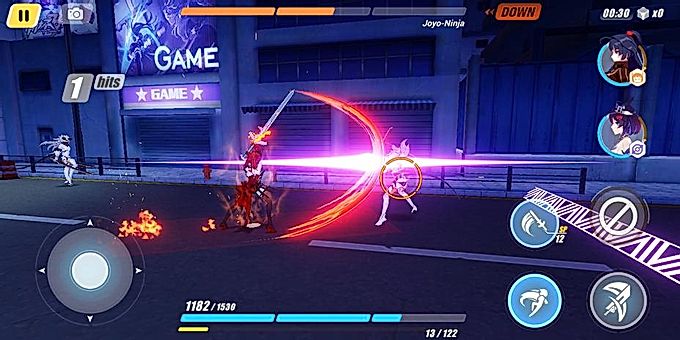 Static screenshots, unfortunately, are not able to convey what it is like to control a well-pumped high-level S-rank Valkyrie in the arena. Many users have noted the "hurricane" gameplay of Honkai Impact 3rd. The developers even provided a special mode for taking screenshots, in which the battle is paused and the interface elements are removed from the screen.

You have to fight in the same arenas. Completed chapters of the story campaign on normal difficulty have to be repeated in order to pump the characters. You won't be able to complete the entire campaign in one fell swoop - enemy levels grow faster than Valkyries. In addition, some resources for pumping can be obtained only with repeated passes. So you have to arrange daily "raids" on familiar arenas in order to pump up a little and grind resources. However, the battles are still cool.

The developers are trying to diversify the routine cleanup. In between raids, you can take part in events, join a clan and discover cooperative and competitive modes. But this will not save you from endless races in the storyline campaign.

In addition, the player is responsible for building a dormitory base for the Valkyries. So you will have to deal with floor coverings and arrange furniture. A sort of The Sims at the minimum. Resources for the development of the base can be obtained by pumping stigma. This aspect of the game cannot be ignored. The base generates and stores stamina points, which are spent upon entering the arenas. And an extra penny, which can also be collected at the base, will not hurt.

In fact, stamina points are a pay-to-play element, and they are only needed to limit the grinding of resources. The huge number of Valkyries available to the player requires a huge amount of time to pump them and the same huge amount of resources for weapons and stigmas. And the Valkyries are not simply given out. Getting it all for free is a difficult task that can be mastered by either very diligent or very frugal players. 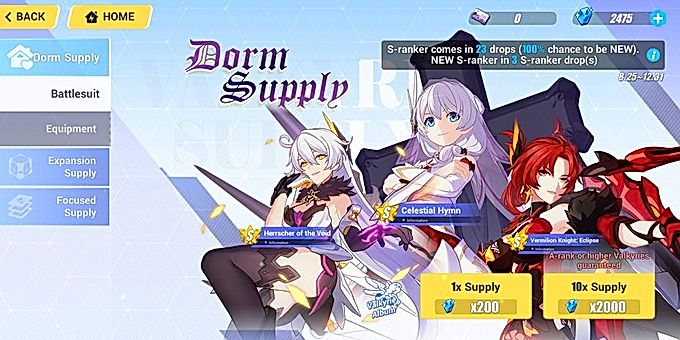 But buying all this stuff is not easy either. The fault is gacha, that is, a lootbox casino. Anything can appear from a box purchased with premium currency. The developers guarantee that a high-ranking weapon or character will drop out with a certain number of scrolls of the virtual "wheel of fortune", but there are no guarantees of getting the character you need.

Comparisons of Honkai Impact 3rd with Genshin Impact are unavoidable. And this comparison is not at all in favor of Honkai. They are similar in many ways. The player in both the first and the second needs to download characters, grind, collect a collection of beautiful waifu. In Honkai Impact 3rd, their eyes run up with joy. The combat systems are similar, but in Genshin Impact it is simplified, most likely for the sake of the mass player.

Otherwise, Honkai Impact remains a beautiful mobile gacha casino game. From the disastrous swamp of donat dumpsters, this game is pulled out only by the perky and hurricane gameplay, which is fed to the player in tiny portions. This made it possible to kill two birds with one stone - the developers got rid of the endless free grind and the player does not have time to get bored with monotonous battles. But this pay-to-play element is killing free play. In Genshin Impact, the primordial resin only limits the grinding, but the player is left with interesting adventures in the open world. When restrictions are triggered in Honkai Impact, the player is left with nothing but beautiful pictures. 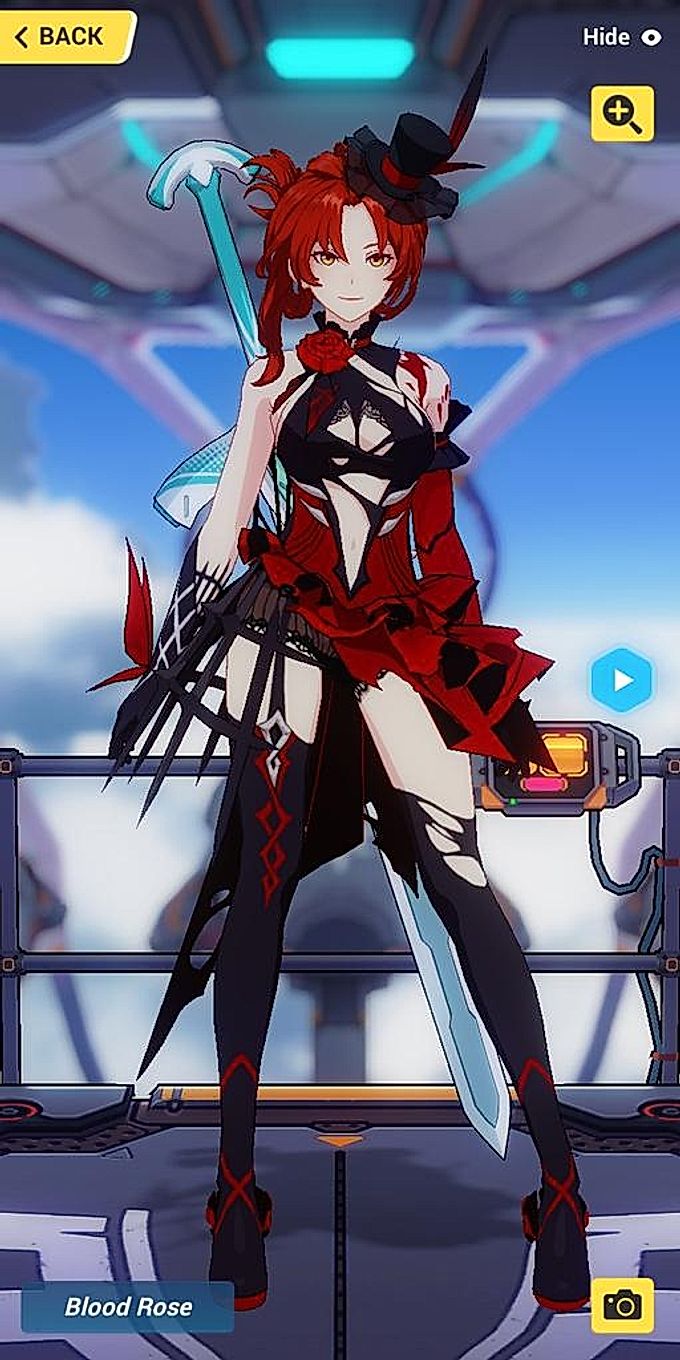 Honkai Impact 3rd can be played, but only with full knowledge of what you are playing. In various events, you will be given the opportunity to play for S-rank and even SSS-rank level 80 Valkyries almost at the very beginning of the game. You will feel how fun you can "hurricane" in the game, you will strive for it. But the generously poured stamina and poured in-game currency will dry out around level 30. If you are interested in the game, you will find two ways - pay a lot or play for a long time and in fits and starts. But the casino will be there anyway. Really, it's cheaper to buy collectible waifu figurines than to collect pretty pictures. And you can play for free, though not for long.