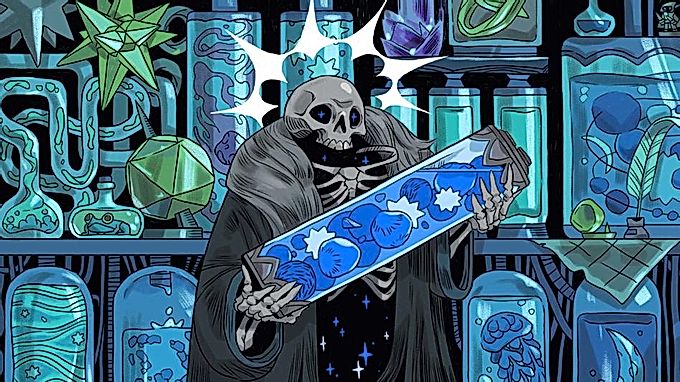 Pixels. It is difficult to make out anything on the playing field. It seems like the hero walks in a circle, fights ... with someone. Wins, dies, starts over. And, nevertheless, the attention to this apparently inexpensive product is enormous.

Yes, Loop Hero was inexpensive. Four enthusiasts from the Four Quarters Team studio created it for their own money, and the idea was transformed into a playable demo in a few days. Then they managed to interest the publisher Devolver Digital, who provided PR support. The game was released and unexpectedly (first of all, for the developers themselves) gained popularity. 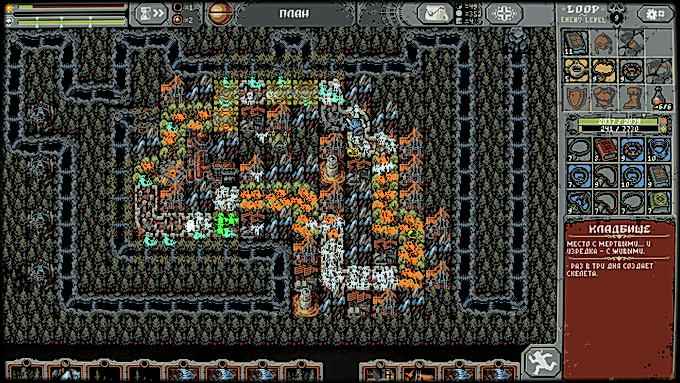 If you describe Loop Hero in the gibberish of gaming slang, then this is a roguelike autobattle with elements of a collectible card game, city-building simulator and a dungeon keeper. Sounds like bullshit. If you describe it in detail, it will not become clearer. The hero walks along a path in an empty black space and fights monsters on his own. The player with the help of cards dropped from the monsters (such as "mountain", "forest", "river") gradually completes the world in cells, and each piece has positive or negative effects, which are not obvious at first. I put a cemetery - skeletons climbed; village - began to receive tasks to destroy strong enemies; slapped a vampire manor near the village - all its inhabitants turned into zombies ... Surprise!

Loop Hero captivates with the combination of elements in the process of generating a new world and stimulates experimentation. The player's task is to create the most difficult obstacle course for the hero, but still surmountable. He must quickly pump, get new abilities and items, become stronger in order to come fully armed to the final boss. If you miss it, the hero will not have time to level up. If you push it, he will die on the way. We'll have to start all over again.

Loop Hero's story is simple. The local deity became disenchanted with the world and erased it. Only our hero remained, with the ability to "remember" the old world and restore it piece by piece during the journey. 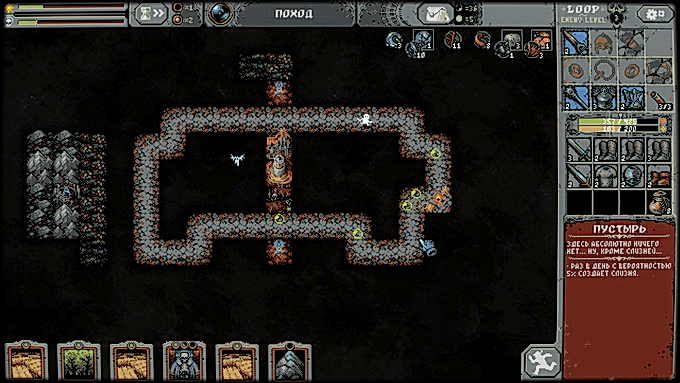 The starting point is the camp. It takes a long time to equip it, collect resources, build watchtowers, farms, dugouts, an alchemical laboratory and even a river. There are many buildings, some of them can be improved (thereby increasing the passive skills of the hero). Dozens of hours will pass, and still there will be something to do in the camp. Especially if you make a mistake with construction, it will ineffectively dispose of limited space. You demolish buildings and erect them elsewhere. 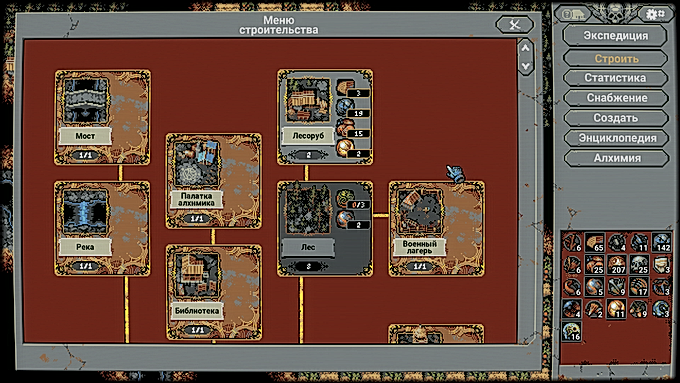 As the camp expands, the classes available for the hero are replenished (Warrior, Dodger, Necromancer), as well as cards with which you will have to "remember" the world on the next expedition. The more cards are available, the more interesting it is to build a deck before starting the journey, optimally adjusting amplifiers and enemies for a specific class of hero. But read the descriptions carefully! Let's look at a specific example.

The "Outpost" card summons a militia in the indicated area for help. This is if you are playing a Warrior. If the Necromancer gets involved in a battle near the outpost, then not only will no one come to help, but he will also be fired upon from bows!

There are many cards. Some of them serve to increase the hero's passive skills - life, speed, or the amount of experience gained from enemies. Others create lairs of monsters, and over time, the entire path of the hero turns into an endless battle without rest, where every step meets you with a pack of dogs, goblins, fire-breathing snakes or zombies with a vampire. Some cards interact with each other. Others acquire new properties if you clear an adjacent cell. The conditions for the appearance of secret bosses are still a mystery. 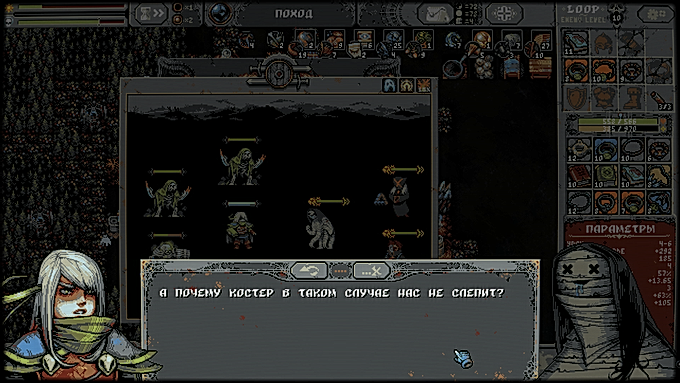 The hero gains levels and acquires new abilities from three random ones to choose from. He also finds objects, learns to parry, hit everyone at once, ignore the enemy's armor, increase attack speed and much more. As a result, you can fashion a narrowly specialized fighter, relying on a couple of skills.

It should be borne in mind that the three available classes are completely different. So much so that if you go from the Warrior to the Dodger, you will only have to sigh bitterly - a worthless weakling! But if you add a couple of previously unused cards to the deck (due to their obvious "uselessness"), bet on evasion and counter-attacks. This results in an invulnerable death machine with an insane attack speed. The necromancer requires a different approach, and it will take a long time to get the perfect build. Moreover, it will be "ideal" specifically for you. There are already quite a few “best builds” on the net, united by one funny rule - they are all different from each other. 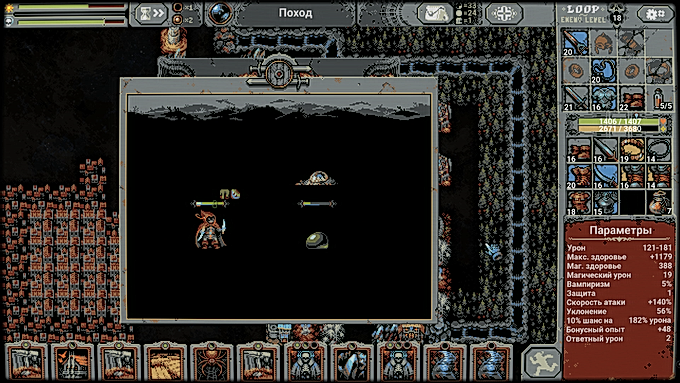 At the time of this writing, I have spent over 56 hours at Loop Hero. Not out of necessity. A game is really SO addicting if the concept is to your liking. It is difficult to unstick. You try again and again, sigh in disappointment in case of failure, collect the accumulated resources, return to the camp, erect or improve one or two buildings, immerse yourself in an encyclopedia, read entertaining descriptions of monsters and chairs (not a typo). You fix the composition of the cards in the deck before the new expedition - and all over again. One more time. And there it is already dawn.

The Loop Hero effect can be compared to trying to build a perpetual motion machine. The hero walks in a circle, and your task is to make such a guy who would autonomously demolish everything in his path. With each circle, the monsters become stronger, so the hero must be quickly pumped. The greater the variety of enemies, the better the rewards, but at the same time it is so easy to stumble ... You will be haunted by failures for a long time, but then suddenly everything will work out, and the hero will rush with a combine harvester to grind enemies on a completely built-up world map. Circle after circle, passing by destroying all bosses.

Okay! The assembly was definitely a success. What if we add this card here? Let's try. 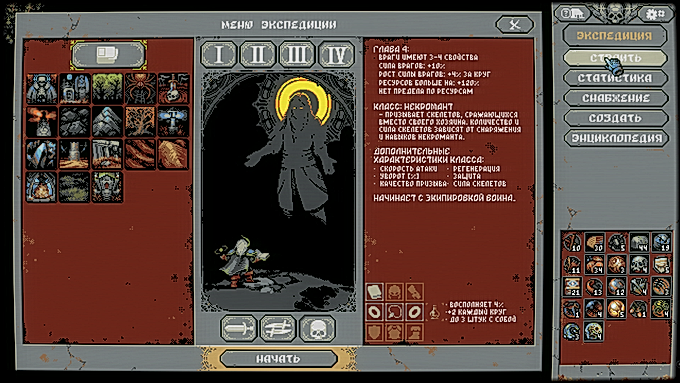 Personally. This is one of the best and most addicting games in recent years. An unusual mixture of genres, a huge space for experiments with maps, world building and hero assemblies. Dozens of hours fly away unnoticed.

Objectively. Another pixel crap. Try it, it will suddenly tighten.